Blog - Latest News
You are here: Home1 / Pyramid Games, Ponzi Scheme, Hyips2 / Pyramid and Ponzi Scheme – What Is the Difference Between Them? 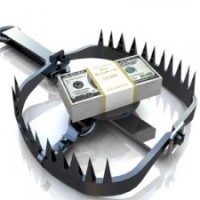 Pyramid games (pyramid schemes) have many forms and sometimes it is difficult to recognize them. However, they all have one shared feature. They promise customers and investors huge profits based mostly on recruiting another members to the scheme, not based on real investments or real sale of products and services. Some schemes may support the sale of a product, but it is often just using the product to cover the pyramid scheme. There are two indications that the product is being used to cover a pyramid scheme: inventory purchase and low retail sales.

Inventory purchase occurs when a company’s motivation system requires new members to purchase more goods than they can sell, and often overpriced. If this happens through the company’s distribution system, people at the top of the scheme receive significant profits, even if little or no products are sold to the end customers. People at the bottom of the scheme pay unnecessarily high charges for excess supplies of goods that they accumulate in their basement.

Low retail sales are also a sign of financial (pyramid) scam. Many founders of pyramid schemes assert that their product is fantastic. However, a more detailed examination reveals that the sale only takes place within the pyramid structure and not to the general public.

Pyramid scams work mostly on the basis of pyramid scheme, or Ponzi scheme. In this article, I will try to describe how these two schemes work, and mainly the difference between them.

It is a scam model, whose principle is that each participant must pay an entry fee to enter the system and in order to earn money, he/she must recruit another people, who will also pay the entry fee. The participant keeps share of the entry fee and the remaining amount goes to the members “above him”, who has entered the system earlier.

This cannot work in the long term. Pyramid scheme does not offer any product or service that has a real value. This is very important indication!

Pyramid scheme should not be confused with a MLM (multi-level marketing) system. Although there is such a thin line between these two systems that it is sometimes difficult to recognize.

You can read more about this topic in the section exclusively for MLM, specifically in the article where multi-level marketing came from and what it is. In the mentioned section you will find more articles.

A Practical Example of Pyramid Scheme

This may seem to be a great opportunity for a potential investor. The founder of the pyramid scheme is likely to convince the investor that he/she is entering the scheme at the very beginning. It seems that the investor can earn $6,750 for an investment of only $1,000, which represents a fantastic yield of 675%.

2. A Founder of Pyramid Scheme

Let’s analyze the situation from the viewpoint of a founder, who is at the top of the pyramid and actually earns from each level. Every new investor represents the anticipated incomes and expenses for him. The founder receives $1,000 from each new member, and in the worst case, he has to pay older investors a commission of $450 for recruiting a new member. Thus, if the investor enters into the system at the last level, the founder will receive $1,000 from him, but he pays only $300 to the person who recruited him, and $50 to each one of the three older members in the branch of new investor, i.e. $150; totaling at $450. The founder will keep more than half of the membership fee of $1,000.

Now let’s assume that the scheme collapses after the recruitment of the fourth level. According to this example, the founder receives an incredible amount of $69,700 (more levels, more money): 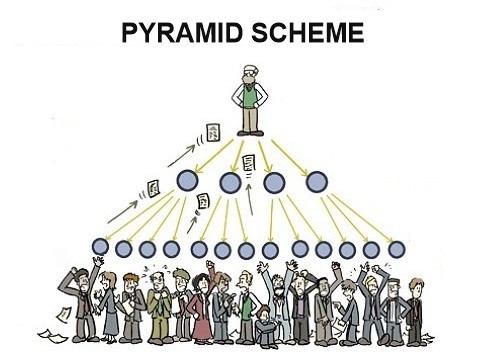 The structure of such a pyramid scheme causes that at least 70 percent of investors will be at the bottom of the pyramid and without possibility of getting any profit once it collapses.

In our case, the investment will not even return to the third-level investors. They paid a membership fee of $1,000 and received 3 commissions in the amount of $300.

In short, when the pyramid scheme collapses, none of the investors at the two bottom levels receives back their original investment. The number of victims from two lowest levels is 89% of the total number of participants (108 out of 121 investors).

It is very similar to the pyramid scheme because it requires constant recruitment, but in Ponzi scheme, the founder does not usually sell the product (sometimes yes) and does not pay commissions for recruiting new members. Instead, the founder collects payments from many people, promising them a high return on short-term investment.

The Ponzi scheme, named by Charles Ponzi, an Italian immigrant in the US who cheated on people using this method in the 1920s, is based on persuading people to invest in something with a guaranteed return rate, while the money of those who invested later, will be used for paying out those who invested earlier.

Does Anyone Make Any Money? If So, Who Is It?

Someone has to earn. Otherwise, these schemes would have disappeared a long time ago. How? If I start the scheme, after a while, I will pay off the people who have invested as the first ones. Thus, everyone gets the impression that it works. And it works, but only for limited time. As soon as new investors stop showing, the owner of Ponzi scheme does not have the funds to pay off the first investors, and the system will break down. Well, who will earn the most out of it? Those who started the scheme and those who joined at the beginning.

“Business” using the Ponzi scheme is considered to be a crime everywhere around the world, and since it is illegal, it is often being interrupted by authorities before it collapses.

How the Ponzi Scheme Works in Real Life

The administrator provides a 10% monthly return. The first investors will be paid 110% of their money after the first month (i.e., after one month they receive $1,100 of the investment of $1,000). The administrator can spend this money from his own pocket. Investors find it to be a good deal. They give a tip to colleagues, friends, etc., and they deposit another cash. The funds will begin to flow to the administrator, because there is often human greed present, and both old and new investors begin to accumulate large amounts of money. To prolong the scheme activity, several “tricks” are used. One of them is reinvesting (compounding) of the interests back into the system, i.e., the investor does not withdraw his money after a month, but he will keep them to continue “working” there further – the investor owns $1,100 only on paper, not in reality.

Investors do not have to recruit new people into the system to make money. It’s not their duty. But the administrator can motivate them to do it with another % of the return. So if you recruit five new people to the system, your monthly yield will increase from 10% to 15%.

Interest on New Investments Is Paid until:

The Ponzi scheme with 10% monthly interest – 10 investors every month deposit $1,000 and only then interest is collected. The maximum amount of funds in the system is in the 10th and 11th month (time for the founder of the Ponzi scheme/scammer to escape with money), i.e., $5,500. The system itself is at zero in the 21st month, and in the 22nd month, there are no funds to pay out the interest. The first ten investors will receive back their deposit and at the same time $1,000, which is 100% extra.

Read also the article about the Ponzi scheme, where I explain how it works based on my own experience with Zeekrewards and Banners Broker projects.

What Is the Difference Between Ponzi and Pyramid Scheme?

The Ponzi scheme is often changed with the pyramid scheme. There are two fundamental differences between these two schemes:

The Ponzi scheme is one of the most commonly used schemes because it is much slower than the pyramid scheme and is used mostly to “finish” a non-functional business or investment model.

Any such scheme – whether pyramid or Ponzi scheme – is sooner or later destined to collapse, because an infinite influx of investors is not possible.

7 Ways to Uncover Financial Scams – this article is about how to recognize a financial scam from a legitimate investment company.

Haven’t you find what you were looking for in the article? Then try to check the discussion forum. There may be some interesting information on this topic.

Have you ever come into contact with pyramid / Ponzi schemes? I will be glad if you join the discussion and share your experiences.

Did you find interesting information in this article that you consider to be useful? Then share it with your acquaintances and maybe you help someone. Just share the article or like it. I certainly recommend joining my Facebook group, where I keep posting news about remote work from home, doing business on the Internet and making money online. Click on “Like” and in notifications set “receive all posts.“ Or you prefer tweeting? Then follow my articles and offers on my Twitter account.