Blog - Latest News
You are here: Home1 / Suspicious and Fraudulent Systems2 / ZeekRewards – a Scam That Robbed Its Participants of $ 600 Milli...

In this article, I have recalled my first online business, Zeekrewards, which I came across when I first became interested in making money online. This project offered easy earnings with hardly any work and the promise of significant rewards. It turned out to be a perfect scam – a Ponzi scheme. However, by the time it collapsed, the owner of Zeekrewards, Paul Burks, comfortably earned over $600 million. That is the sum mentioned by the SEC (the US Securities and Exchange Commission) which stormed their offices and froze a smaller amount of the total sum mentioned.

The larger part was divided among the participants who joined this Ponzi scheme at the beginning.

It all started in March 2012, but I remember it as if it were just yesterday. A friend came to me and said: “Listen, I came across a great online business“. Up to that point, we’d only earned a little money on paid to click email systems. You know the systems: when an advertising message comes in, you click on it and get paid a few cents. You can also read my opinion and experience with Paid to Click systems on this website.  To read the article, please click here.

As the Pay to Click systems earnings were not great, we decided to move on and so we signed up for Zeekrewards.

Why Did We Register with Zeekrewars?

The answer is fairly simple. The project advertised itself with a promise of great financial freedom. It was started by a US auction company Rex Venture Group; they launched the “revolutionary” Zeekrewards project in 2011.

The system was quite simple, and perhaps that was why over 2 million people worldwide liked it.

The dream of easy-earned money and, in particular, the assurance of financial freedom clouded the judgment of many registered participants, myself and my friend included. We had no problem investing a few hundred dollars in this project.

How Did the Zeekrewards Function?

Once registered with Zeekrewards.com, our job was to send at least one advertisement to an advertisement portal every day. For this, we received a reward of 1.5 to 2% of the company’s daily profit. The goal, of course, was not just to send advertisements, but to get some real customers, through the advertisements, to invest in so-called Penny Auctions.

The website where these Penny Auctions took place was called Zeekler.com. One must not confuse this with Zeekrewards. Zeekler was for the customers who auctioned the below-mentioned items only, whereas Zeekrewards was for co-workers who wanted to make money.

How Did the Penny Auctions Work on Zeekler?

Penny auctions on the Zeekler system had this form: The shop owner announced an auction of a product – cell phone, laptop, expensive cooking pots, jewelry, watches, and even an expensive car or a holiday were up for auction from time to time. There were several auctions taking place at the portal simultaneously. The auction was started from $0; even the advertised vacation which had a real value of $4,000, would have the starting price of $0. As time began to count down to zero, customers began bidding. The last one to bid would be announced as the winner. 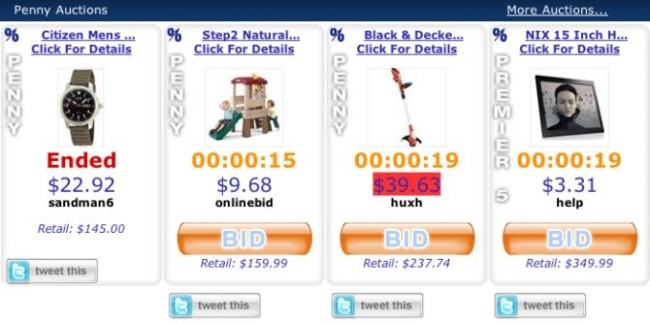 It often happened, for example, that the final price for a laptop with a retail price of $800, would be just $35.00 at the auction with Zeekler.  You’re probably thinking – Really? Why is a laptop worth $800 auctioned for $35? How is that profitable for the company? Bear in mind that one bid increased the value of the auctioned product by just $0.01, but the bid was actually worth $1. So if a laptop was auctioned for $35.00, customers basically placed $3,500 bids, so in reality, they paid up to $ 3,500 for a laptop.

What Was the Catch with the ZeekRewards System?

Well, as it happened, not many customers actually purchased bids. You may ask yourself how did they end up with 3,500 bids on the mentioned laptop? The answer is: it was us, the Zeekreward’s co-workers/partners who paid for them (those bids) –  100 bids cost $100. 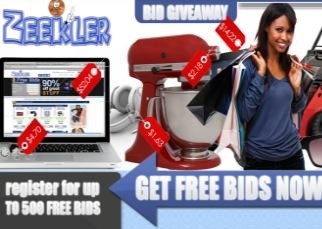 An example of an advertisement in ZeekReward’s back office – „Register free to earn 500 free bids and win an interesting price“.

In order to attract customers who would play and auction Zeekler products, we had to offer them free bids in the advertisement.

Everything was prepared in your internet office. If someone signed up through my link and used the 100 free bids, that would cost me $100. I was hoping that the free bids would be sufficiently attractive to encourage the bidder to purchase additional bids on their own with their money, which would then mean earnings for me.

Another important aspect was that when 100 bids were purchased and a new person signed up through the advertisement you placed on Zeekler, you earned 100 VIP points on your account. These points kept appreciating over the next 3 months, and at the end of those three months you have tripled your total amount of points.

In other words, your $100 investment is now valued at $300. This is a 200% appreciation in 3 months!! This sort of fairy tale investment percentage increase is not offered even by the riskiest HYIP programs!

When I think back on this, I shake my head in disbelief. How could I have fallen for something that was clearly a Ponzi scheme?! But, at the time I was inexperienced and very naive.

The commissions for the new co-workers introduced within your structure were very generous. If they also purchased bids and offered these bids to their customers free of charge, you would receive an additional decent reward.

Everything was so beautifully thought out that not many people actually realized that it was actually a highly sophisticated illegal Ponzi scheme, where those Penny Auctions and bid purchases were in fact, simply, a smokescreen.

Suddenly, all my dreams of “financial freedom” disappeared from one day to the next. Many people who may have had experiences with similar schemes in the past probably knew what was going to happen, but probably did not expect it to happen so soon. For others, it was a complete shock. In mid-August 2012 (about 5 months after my registration), the US Securities and Exchange Commission (SEC) stormed Zeekrewards offices and froze all of their financial assets. Over time, it transpired that the company earned over $600 million, of which 350 million were distributed amongst the members who were at the top of the pyramid structure.

What was even more shocking, was finding out that from a total of $600 million, only 2 percent was earned from the Penny Auctions ($12 million), from the real customers who actually purchased bids. The remaining $580 million was collected by the owner of Zeekrewards. He profited from those co-workers/partners who in their hope for financial freedom purchased the introductory bids.

These introductory bid purchases actually repaid those members who registered early, which brings us to the basic definition of a Ponzi scheme.

Was This a Carefully Planned Fraud, or just an Unfortunate Turn of Events?

The owner, Mr. Paul Burks, would be the best person to answer this question. Perhaps when Zeekler and Zeekrewards were created he had the best intentions, but after some time he had to have realized that those few hundred playing customers who bought bids for own money, couldn’t possibly payout to 2 million registered associates in Zeekrewards.

Either way, Zeekrewards cemented its place in history as one of the biggest (if not THE biggest) scams.

You may ask what happened to the owner Paul Burks? There are many theories circulating on the Internet – one being that he was allegedly under home arrest and had to repay a $4 million fine. But if he was smart enough and siphoned the money away (of which I have no doubt) before the company was shut down, paying that fine would not be a big problem for him.

This article talks about Paul Burks, who was sentenced to 14 years in prison.

Many people (myself included), out of sheer frustration over their lost money, would jump into another internet business. For myself, this was actually the same month as Zeekrewards folded. This, too, turned out similarly with the difference being that the next company was not shut down by any government organization.

This experience was called a Banners Broker project; I have written a separate article about it titled, Banners Broker, a scam project of the decade.

You could be interested in:
7 Tips to Uncover Pyramid Scams – in this article you can read about how to recognize credible investment companies from a Ponzi scheme.

Looking back at both these projects with the benefit of hindsight, I can’t believe that I actually invested my own money into something like that.

Fortunately, in the case of Zeekrewards, it turned out relatively well for me. Part of the financial assets that the SEC froze, had to be returned to the investors as damages. It was roughly around $280 million. I was fortunate to receive most of my investment.

There is also another positive thing that came out of this negative experience with Zeekrewards and Banners Broker. Thanks to these scams, I created this website. On this website, I do my best to warn my readers about the various frauds, but I also point out the legitimate forms of making money online.

Based on my experience with the above-mentioned projects, Zeekrewards and Banners Broker, I recently wrote an article explaining the 10 common characteristics of companies that operate on the Ponzi scheme. Click here to read the full article.

If you can’t find what you were looking for in this article, check out the discussion forum. You may find interesting information on this subject.

Have you also been a victim of this scam? Please join the discussion and write about your experience.

Did you find this article informative and the information useful? If so, please share it with your friends. If you are interested in finding out more about online earnings, I would definitely recommend joining my Facebook group, where I regularly post news about various work opportunities from home, doing business via the Internet and making money online. Click on “Like” and in notifications set “receive all posts.“ Do you prefer tweeting? Then follow me on Twitter.