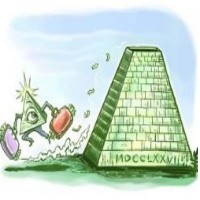 In the cryptocurrency world, pyramid schemes/Ponzi schemes are nothing new. Cryptocurrencies like Bit­coin, Litecoin, Ethe­reum and others are becoming more and more popular, so it comes as no surprise that dubious online projects and businesses begin to emerge, which misuse this current phenomenon. In this article you learn in particular about the difference between legitimate electronic currencies, like Bitcoin, Litecoin and others, and pyramid (scam) crypto coins, like Coinspace or Onecoin, and what these pyramid systems have in common.

What Is a Ponzi Scheme/Pyramid Scheme?

I find it important to introduce you to one of the most common forms of “business” used by scammers that was (and still is) used as the basis for many digital pyramid currencies (this goes not only for cryptocurrencies, but many other areas as well), including Onecoin and Coinspace. It is the so-called Ponzi scheme.

The Ponzi scheme term describes fraudulent investment operations, in which the company gets money from investors to “double or triple” it. But there is no multiplication of this money. The company does not work with the payments of investors. It means that the only source of company income, working on the principle of Ponzi scheme, is money from investors and later out of this budget the interest is paid out.

Usually, these are investors that were among the first to invest. It represents the basis of the Ponzi scheme/pyramid scheme, and this is linked to the term pyramid cryptocurrency. More information about pyramid schemes and how they work in real life, check the article Basic Characteristics of Pyramid Schemes. I will add that doing “business” using a Ponzi scheme is considered a crime worldwide.

Practically anyone can create this cryptocurrency. However, for the Internet currency to work in the real world, it is necessary to spread it among the people and follow some rules at the same time.

The main advantage of this virtual currency is the fact that it is not managed by any bank. However, this also entails some risks, especially due to the instability of the exchange rate. Today, you can buy one Bitcoin (BTC) for $5,000 and tomorrow you can sell it for $7,000 to make a huge profit, but sometimes the opposite is true.

Differences Between the Pyramid and Legitimate Cryptocurrencies

The main argument of the creators and especially the promoters of pyramid cryptocurrencies is: “But look at Bitcoin, don’t you see how well it is doing? Recently, one Bitcoin (BTC) was selling for 18 000 Dollars. And that’s where our virtual currency will get as well, and you can be part of this business. You can buy one S-Coin (the cryptocoin of the Coinspace project) for 1 USD and within a couple of months, when its value will rise to staggering heights; you can sell it for a huge profit”.

Here are a couple of reasons why this will never happen.

1. What Determines the Value of the Cryptocurrency?

While the exchange rate of crypto coins like Bitcoin, Litecoin and other real currencies is determined by the market based on demand and supply (in other words, the greater the demand for Bitcoin, the more expensive it is and vice-versa), the value of scam cryptocurrencies like Onecoin, Capricoin or Swisscoin is determined by their owner, based on the number of investors, who have registered in the pyramid scheme/Ponzi scheme.

The value of any cryptocurrency is not set by the person managing this type of currency (as is the case with Onecoin, Capricoin and others), but it is determined by the market.

While cryptocurrencies like Bitcoin and others have a real value and can be used as universal currencies, pyramid virtual currencies are completely worthless. They do have a certain value, but only within its closed pyramid; their value outside of it is zero.

You can use Bitcoin, a worldwide recognized cryptocurrency, to pay in online stores and you can trade with it on the stock exchange or exchange it for Euros, Dollars…

However, none of this applies to pyramid crypto coins. You can exchange mined units (numbers, which will never have real value) for real money only by using their internal stock exchange, i.e. other ignorant people, who will register in the system and invest.

Never expect any real money from a financial institution/stock exchange for these pseudo cryptocurrencies.

Internet currencies like Ethereum, Bitcoin, and others are anonymous and mainly decentralized. Banks do not support them and their exchange rates are not regulated.

Cryptocurrencies, such as the most famous Bitcoin, work using Blockchain technology. It is a kind of public database that shows every transaction that occurred in the Bitcoin network. Each user can find out what amount of Bitcoins belongs to a specific address thanks to this database.

You won’t find such database with digital currencies based on the pyramid or the Ponzi scheme.

5. A Cryptocurrency Isn’t Created All by Itself, It Has to Be Mined

Mining virtual currencies like Bitcoin, Dogecoin or Namecoin is done using very complicated calculations. High-performance computers and servers capable of handling these big calculations are needed. However, it is not possible to verify how this mining works for Onecoin, Coinspace and other pyramid cryptocurrencies, because as already mentioned, the system is centralized and the company itself is the only one which can mine it.

Hopefully I won’t be considered a conspiracy-theoretic, if I dare to say that in the majority of cases, if not in all of them, no currency is being mined and it’s just smoke and mirrors to mask the illegal nature of the financial game (pyramid scheme/Ponzi scheme).

The owner who created the pyramid based Internet currency, as well as the investors, who attract users into these fraudulent businesses for the purpose of their own enrichment, are often not able to answer even the most basic technical questions about how their system and currency work (or they answer complete gibberish, as if they wouldn’t even know what cryptocurrencies are).

Electronic currencies like Octacoin, Coinspace and Onecoin lure people with quick profit without work and many even guarantee a profit! For example, Coinspace guarantees a 50% profit to their investors.

Bitcoin and other legit cryptocurrencies don’t need any recruiters. There is no one, who would get commission for attracting new investors.

A guarantee is a red flag to any normal investor, because it is impossible to predict market behavior. And the uncertainty is even greater with cryptocurrencies.

Let’s take a quick look at the differences between real digital currencies and pseudo currencies.

All of these systems have one thing in common. You have to invest your own money and buy a starter package. The price of the package starts at hundreds of Dollars and ends at thousands. Coinspace offers a starter package for ten thousand and the Octapartners Project for eighty thousand USD! You will get the opportunity to lease the “mining power” or part of the computing power from the company (you buy “tokens” in the case of Onecoin) for your investment and with it the opportunity to profit from the mining of cryptocoins without the need for own hardware.

These currencies don’t exist in the real world (and they probably never will), but all of these pyramid companies promise that in time their digital currency will enter the circulation, it’s value will increase astronomically and you will be able to make a huge profit by selling it, as was the case with Bitcoin, where some people actually became millionaires.

Onecoin took the promising and juggling so far that it called itself the most transparent cryptocoin in the world. Allegedly, this company was able to eliminate Bitcoin’s mistakes and technologically overtake it.

So all you need to do is to purchase a starter package and then just watch how your pseudo cryptocurrency increases in value at some centralized pseudo stock exchange, which of course is in the ownership of the same people, who created the pyramid.

There are many fraudulent companies that promise that they will enter the stock exchange within a couple of months and then everyone will be able to sell their mined cryptocurrencies at several times of their original value. However, all of these were just empty promises and lies, thanks to which they robbed thousands of people.

7 Ways to Recognize Legitimate Investment Companies from Financial Scams – in this article you can read about 7 basic differences between transparent investment companies and pyramid/financial games.

No matter how huge profits the authors of similar scam businesses promise you, this will never happen. I’m lying now. You can profit from any pyramid/Ponzi scheme. The problem is that the money you make comes from other unfortunate people (investors), who were tricked into these deceitful businesses with the promise of a better future. Pyramid scam brings profit for 5 – 10 % of registered people, the rest will lose their money.

This form of business is built on profit from starter packages and the redistribution of the money in the pyramid. As I already mentioned, the rest of it is just smoke and mirrors to cover the fraud.

I also recommend reading a discussion forum you may find additional interesting information on the topic.

If you already have some experience with cryptocurrencies share it and write to the discussion. Any opinion I appreciate, it can be inspiration or motivation for other readers.